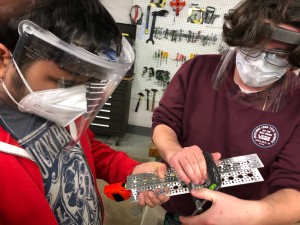 Our First Tech Challenge team (named ReMOEte) has been building and busy. As of right now, the FTC competition – which has been decided to be held in-person – is in two months. So, how has ReMOEte been preparing? Well, they’ve combined all of their skills to create numerous prototypes of what they want their final product to be. They have a functioning shooter, collector, and arm up and ready, along with many needs met regarding programming. The shooter and collector deal with rings in the FTC game, and the arm deals with a contraption called a Wobble Goal. A few issues the team is tackling right now are designing a grabber for the robot’s arm and figuring out the orientation of everything. Overall, this season has brought not only challenges but also fun, new hands-on experiences. Revisit MOENow for future updates on ReMOEte and their work!