The 2020-2021 Miracle Workerz would like to thank our sponsors for their generosity this year.  Without their support, we would not have been able to make the MOE@Home a great opportunity for our new and returning students.  This year was difficult for many.  These companies recognized the value of supporting this opportunity for future STEAM student through this pandemic.  We welcome them as returning sponsors next year and invite potential sponsors to inquire about how you might help!  Feel free to contact us! 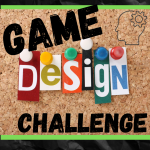 Season 2021 has presented some unique opportunities for the Miracle Workerz this season since in-person competitions are in question. The team decided to pursue several of these challenges, one of which is game design. Using a combination of Slack and Zoom and the power of the imagination, this smaller sub-group is using brain storming techniques combined with a game design template to work up a proposal to the FIRST judges. The sub-team first worked on coming up with storylines, game components, tasks or a complete game concept based on their own individual ideas. As they continue to meet, they’ll narrow down the options to one storyline and put together a completed game design concept presentation for the judges. The competition will initially be a group of up to 30 other teams randomly chosen internationally and move up if selected. Look to MOENow for more information as the team progresses this process! 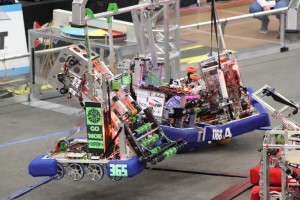 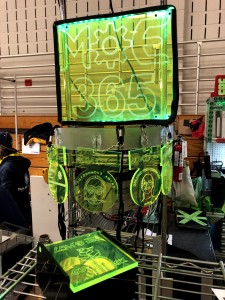 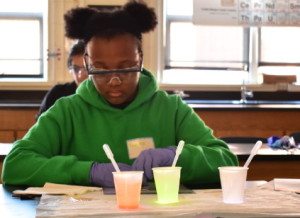 On Saturday February 22, 2020, the Miracle Workerz participated in an annual event, “Engineering Your Tomorrow” at Conrad School of Science in Wilmington, DE. The Miracle Workerz have participated in this event for close to 20 years and have enjoyed being a part of encouraging more young girls to go into STEM careers. This year, our safety mentor, Berlin Stokes was also an organizer for the event and her son, Randy, who is a MOE student volunteered for the event. The team brought CaMOElot so that the students could see first hand the work that our team does. The Miracle Workerz continue to provide outreach opportunities to spread the word of FIRST. GO MOE! 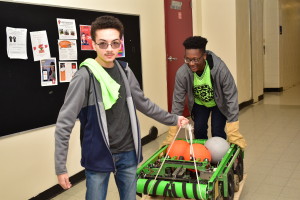 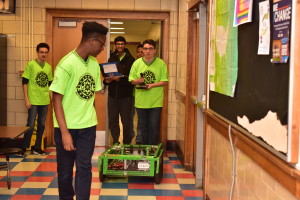 FIRST FRC has officially started their competition season! On Saturday of January 4th, MOE students and mentors arrived at Dupont’s building 700 at 10:00am to catch FIRST’s live feed. The game this year is Infinite Recharge.

But before the livestream of the game, students, mentors, and alumni viewed a moving tribute to 18-year-old Kendrick Ray Castillo who sacrificed his life to save his fellow students from a school shooter in Colorado. Kendrick loved robotics and was a member of FIRST FRC Team #4418, Impulse. Let us keep him and his family in our thoughts and prayers.

Then, Brandon Stewart gave a brief presentation on the expectations and instructions for Slack to the team. All parents, students, and mentors should be on Slack and check regularly and note their expected attendance. Slack is an essential tool for the team to communicate and share ideas.

Afterwards, we were introduced to Larry Cullen, the new president of FIRST, who showcased a touching memorial to Woodie Flowers, a prominent face in the FIRST community who passed away in October. Woodie was known for coining “gracious professionalism” which is part of the ethos of FIRST and is something all FIRST teams try to emulate.
Next was the Kit of Parts which is part of the resources for teams and includes the Kickoff Kit (a box of parts delivered to teams at the start of the season), FIRST Choice (items available via an online menu in exchange for credits issued to all teams), and the Virtual Kit (products available directly from the supplier either via download or direct order).
At 10:53am, founder of FIRST, Dean Kamen came on the broadcast and hinted that asteroids were hurling at FIRST City, robots and students would be used to protect FIRST City by working together. The joint partnership came from Kamen believing in the link between science fiction , great imagination and inspiration. The energy theme came from Dean’s idea that people take advantage of energy and the access of energy determines everyone’s standard of living.

At last, at 11:13am, R2D2 appears to reveal the live playing field and the game animation. You can watch the game design video on FIRST’s YouTube Channel. https://www.youtube.com/watch?v=gmiYWTmFRVE

Then, the long awaited passcode to the game manual was released and MOE team members went to unlock it to find out more about the game. Students read and discussed the manual over lunch and called up Lou Rossi who was present at the actual field to ask questions. A big thanks to all the parents who graciously provided and served lunch for us!
Everyone then split into groups to discuss and study different elements of the game and then regrouped to present our findings.

Thanks everyone for a successful kickoff! Go MOE!