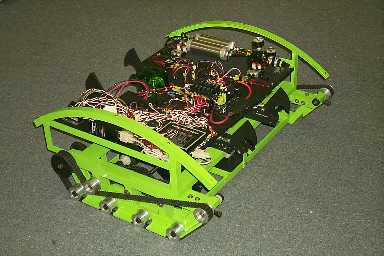 Li'l MOE was designed to play Diabolical Dynamics. This was the last first game in which a match saw only one alliance on the field working together to achieve as high a score as possible rather than two alliances competing directly against one another. In this game, points were scored by filling two tall mobile goals with balls from one's human player, placing large colored balls on top of these mobile goals, having one's robot inside of their home zone at the end of the match, and by balancing one or both of the goals on a teeter-totter in the center of the field.